Ingenuity
When Ingenuity leaves its nest, let us hope it perseveres and thrives.
2021-02-21 Previous Home Next

NASA has been sending rovers to Mars successfully for so long, that it's easy to forget how great an engineering feat it is to land robots on Mars and have them survive.

And yet, this mission pushes the boundaries once more with novel experiments. One of the riskier ones it is carrying is a tiny helicopter called Ingenuity. 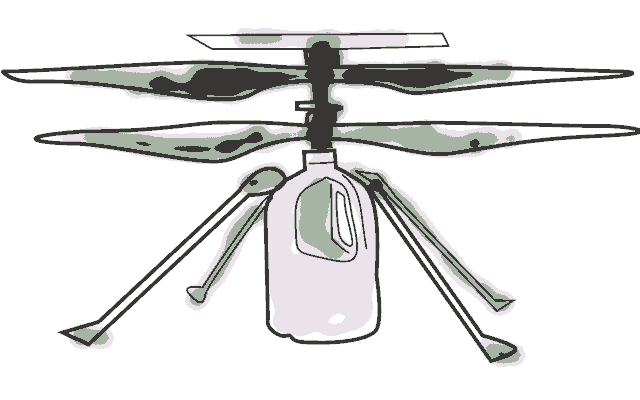 The little copter that could

Ingenuity weighs about as much as a gallon of milk. But even lifting this tiny body into the thin atmosphere of Mars is quite difficult. The air on Mars is only one percent as dense as ours.

The gravity on Mars is also only about a third of ours, so that helps a little. Still, Ingenuity's rotors have to spin about five times as fast as a typical earth helicopter's.

If Ingenuity successfully takes off, it will be the first powered flight on any atmosphere other than ours.

But it has to pass another test before it can fly.

From an engineering point of view, the most exciting thing about Ingenuity is that it has almost no exotic technology on board. It's mostly made of off-the-shelf parts that anyone can buy.

But these off-the shelf parts are designed for use on Earth. Batteries and other electronics are not made for the brutal Martian nights. Most of the power that Ingenuity will need will be just to run heaters to keep the electronics functioning.

Last summer when the Perseverance mission was launched, I wrote here about how these Mars rovers are powered; see Nuclear-Powered Robots. The nuclear generator is necessary for a big vehicle to move, and also to keep it warm through the frigid Martian nights of minus 130 degrees Fahrenheit.

Right now, the Ingenuity helicopter is clinging to the rover's belly like a baby animal. It keeps its batteries charged and stays warm using Mommy's generator.

But it will leave its warm nest come this spring when the rover ejects the protective shield that covers the copter and drops its baby to the ground. Perseverance will then roll away, leaving the copter exposed to the elements.

From that point on, Ingenuity will have to survive on its own power source, its rectangular solar panel.

The very first test it will encounter is the frigid first night on Mars. If it survives that, then it will start performing a few test flights.

Those experiments will start in a couple of months. Today we received the first message from a small communications box on board the rover, that the copter's batteries are charged as expected.