Nuclear-Powered Robots
When you're extremely isolated, sometimes you go nuclear.
2020-08-09 Previous Home Next

In the spring of 2021 on Mars, two new robots will start trundling around on the rocky, dusty landscape, taking pictures, conducting experiments, and extracting soil samples.

The Chinese and American missions carried rovers, mobile robots that will travel around the Martian surface: Tianwen-1 from China, and Perseverance from the United States.

The Problem of Power

As any weary traveler knows, power is a critical resource for your mobile phone or laptop. The same goes for any mobile robot.

The vast majority of mobile robots today are either vacuuming floors or carrying goods around in warehouses. And they typically carry rechargeable battery packs.

When you're designing these robots, battery packs are a delicate design issue. To increase the range of the robot between charges, you would like to add more batteries, but then the robot becomes heavier.

The Problem of Extremes

The Mars rover is an extreme example of a mobile robot. It must withstand rough terrain and weather, run scientific experiments, extract core samples, and communicate over radio. The Perseverance will also spit out a small drone helicopter and launch it.

These activities need a lot of power. The Perseverance needs to remain autonomous and continue on Mars for a long time.

The previous Mars rover from NASA, Curiosity, which landed at a different location in 2012, is still rolling around doing experiments eight years later, and seems to be going strong.

Where are these rovers getting their juice?

The rover carried on the Tianwen-1 weighs 240 kilograms, about as much as a small Vespa scooter. Its mission on the surface will last three months. It will be powered entirely by solar panels.

But NASA's rovers are American-sized vehicles that stay there for years.

Curiosity is as big as a car, and Perseverance is even bigger, weighing over a metric tonne (1,000 kilograms). Plus, it has a built-in robot arm that can extract soil samples.

All of this activity requires a lot of power--- too much power to rely on solar panels alone over many years. NASA has found that solar panels quickly get dirty and damaged by the dust storms common on Mars.

The Curiosity and Perseverance rovers each carry an old kind of power supply: a nuclear power generator that runs on radioactive plutonium dioxide.

This generator has been used on many missions since the 1960s.

It produces a steady 110 watts of electricity. The decay of the radioactive material also emits heat, which helps keep the electronics onboard warm through the freezing nights on Mars.

Supplemented by rechargeable batteries, the generator provides enough power to let the rover pull all-nighters for years to come. 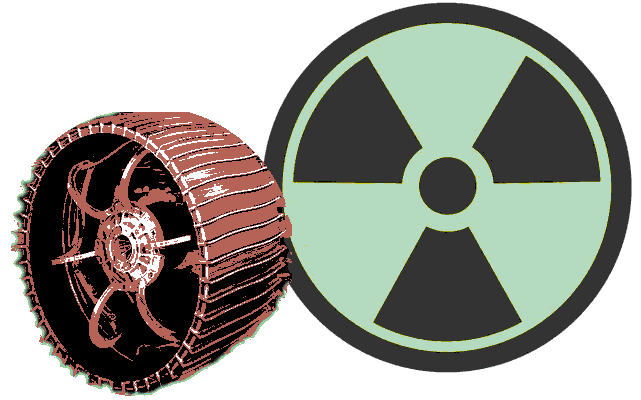