Do You Love Me?
Whether delightful or horrifying, these robot dances aren't really adding anything to the conversation.
2021-01-03 Previous Home Next

Wishing everyone a happy new year, the robot company Boston Dynamics dropped another video this week. 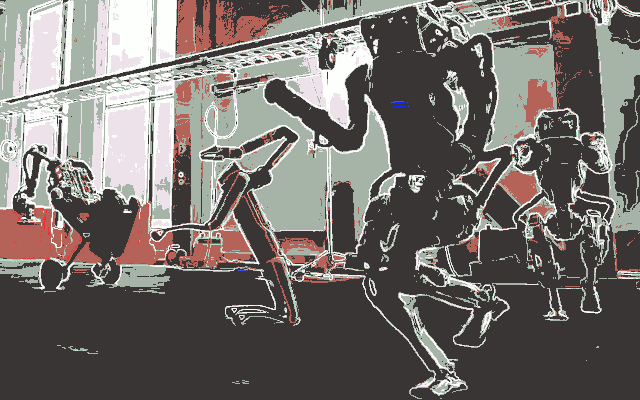 In it, you can see three models, from right to left: the humanoid Atlas, the canine Spot, and the strangely stork-like Handle, dancing to the song "Do You Love Me?" by The Contours.

Boston Dynamics has been publishing such videos for years. Superbly produced, they never fail to light up online discussions.

Viewers seem to react in one of two ways: delight at the happy dance, or horror at the thought that our overlords are coming to destroy us all.

Unfortunately, the video comes with precious little context or explanation. People might get the wrong impression.

A dissection of what you're seeing

Spot is capable of making certain moves, for example, "step to the left," or "proceed to a certain point nearby". The person sends such commands using the controller. On receiving the command wirelessly, the robot is capable of maintaining its balance while performing the action on its own.

Some of the dance moves in the video look exotic and are not normally part of its repertoire; I am guessing that a few special moves have been programmed by the developers specifically for this demo.

For the other two robots, I don't know what moves they can make, but I assume the facilities for controlling them are similar, and that they have also been specially programmed with a few moves for this dance.

It is easy to mistake performance for competence. The more life-like the robots look, the easier this mistake becomes for viewers.

We use our experience with animals to evaluate what we are seeing. When we see a sea lion performing a balancing act with a ball, we know that it can also follow directions for food, that it has goals and intention— that it is what we call an intelligent animal.

We therefore ascribe too much competence to these robots. Being able to balance and even jump on your feet is not the same thing as being intelligent in the sense of AI. That goal remains far, far away (see Being Intelligent About AI).

Don't get me wrong— dynamic self-balancing is a difficult problem in robotics, and Boston Dynamics has shown it convincingly. But the stomping of feet you hear is not the sound of Skynet.

As you watch the video, try to keep these thoughts in mind. Sometimes, what you're seeing is just a song and dance routine.

Note: Roboticist Rodney Brooks was the first one to distinguish "performance versus competence," as far as I know. It's a great phrase.