Spot for Sale
With the robot dog "Spot," Boston Dynamics has achieved something remarkable. But their real test is still ahead.
2020-06-28        Home Next 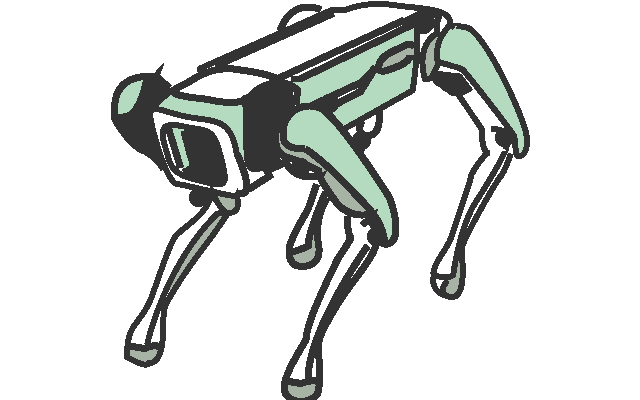 Boston Dynamics in Waltham, Mass., has been building legged robots for decades, but last week it started selling one of them. The company announced that "Spot," their stair-climbing dog-like robot, is now available for sale in the United States.

Why is this a big deal?

Researchers have been trying to create walking robots for decades. In 1980, Boston Dynamics founder Marc Raibert founded the Leg Lab as a professor at Carnegie Mellon. He later moved to MIT. In 1992 he spun off the company, and soon after, he began working there full time.

The promise of legged robots is undeniable. Not only do they look cool, but unlike wheeled robots, they can go wherever people can: rock, grass, sand, and up and down stairs. Over the years, roboticists have created many lab prototypes, but none of them have been commercially successful. Boston Dynamics's high-profile announcement means that they think they have something real.

Why is legged locomotion not yet ready?

Why has legged locomotion been such a challenge for robots? After all, we've had mobile robots on wheels for a long time. Amazon's warehouses are full of robots that zip around, locate an item, and carry its entire shelf unit to the packing station so that a worker can fulfill an order. What's different about robots on legs?

Well, to create a wheeled robot, you essentially start with a golf cart and replace the human with some software that can steer left and right, accelerate forward and backward, and brake. Writing software to do these things is relatively straightforward. On top of that, the robot needs the higher-level ability to navigate reliably from one point to another. This is a more challenging software problem, but it is solved for restricted environments like warehouses.

Walking on legs is a much harder skill to replicate using electromechanical parts and computer software. There are no wheels to continuously support the body in a stable way. Even standing on two legs is quite a difficult proposition, as any baby growing into toddlerhood knows.

Walking is even harder. As soon as the robot takes enough legs off the floor, it becomes unstable and a fall is imminent. The robot needs to sense the direction in which it is going to fall. It must respond promptly by twisting its body and bringing the legs down quickly enough to break the fall. Too quick, and the step won't take the robot very far. Wait too long, and it will end up stomping on the ground, throwing its gait off and wasting energy.

When we stand or walk, we coordinate our limbs and core using our senses to make quick adjustments to our posture. This is how we keep our balance. Since it's mostly a subconscious reflex that our bodies learned to do a long time ago, we think it is easy. The robot must be programmed to perform similar adjustments.

The forces and energy transfers needed to keep a legged robot balanced are mathematically complex to model. And creating a model is just the beginning; the robot needs to use the model to make the adjustments in a timely fashion before it can take purposeful steps.

You don't realize how little you understand something until you try to teach it to a computer. Every motion to maintain balance must be quantified and specified explicitly. It is hard to program the robot to use sensors and motors to walk, and then you still have to solve the problem of navigating from point A to point B.

How does Spot address this?

Spot's legs are each made of three links. A battery-powered electric motor moves each link. Software running on an on-board computer controls the motors. So the motors are Spot's muscles. Spot can sense each link with built-in sensors and use this information to figure out its own posture. Spot's software commands and monitors the placement of each foot while making the corresponding adjustments to the other legs to keep Spot's balance.

A user can use a phone or tablet to see what Spot's cameras see, and to give Spot wireless commands to walk to a given location on the ground by pointing at it. To get there, Spot's on-board computer figures out a plan, then commands the legs to operate in tandem in the proper sequence.

In the real world where a robot moves, thousands of things can go wrong. The software must deal with expected and unexpected situations and still operate reliably and safely. These "failure cases" typically take the bulk of the effort in developing a robot. Sometimes special hardware and software needs to deal with them. For example, while navigating to a destination, Spot uses its cameras to spot obstacles; if it sees one, it will recalculate its walking sequence to try and step over it if possible; otherwise it will plan to walk around it.

What the future holds

Solving legged locomotion is doubtless a significant achievement. But to survive, robot companies like Boston Dynamics must also solve some real business problem for their customers. Otherwise, their robots risk remaining a lab curiosity.

A few customers have been leasing Spot to try out inspection and data collection tasks, mostly in simulated environments. The robot has patrolled a construction site and taken pictures to track progress. An oil company's personnel were able to remotely operate the robot to inspect oil rigs. Every potential customer's problem is different.

Priced at over seventy thousand dollars, Spot comes with some basic software, but it will usually need additional custom software and hardware tailored to specific applications. The business challenge is to find an application worth the cost of the robot plus the customizations.

Legged locomotion has come a long way since Marc Raibert first made his jumping pogo-stick "Hopper" in his Leg Lab, and the future looks bright.