A Brain In a Jar
How can a computer program make something happen in the real world?
2020-08-30 Previous Home Next

What do YouTube, Netflix, Amazon, and Facebook have in common, apart from absorbing all our time during the pandemic?

They're made of computer software, just like everything else we interact with online.

Besides ruling the online world, software also runs inside devices we use every day.

Software is what breathes life into robots, computers, and automation.

See The Intelligence In the Warehouse

A software program consists of a series of instructions telling a machine how to manipulate information. The instructions on Netflix's computers figure out that you are a subscriber and stream a movie to you. 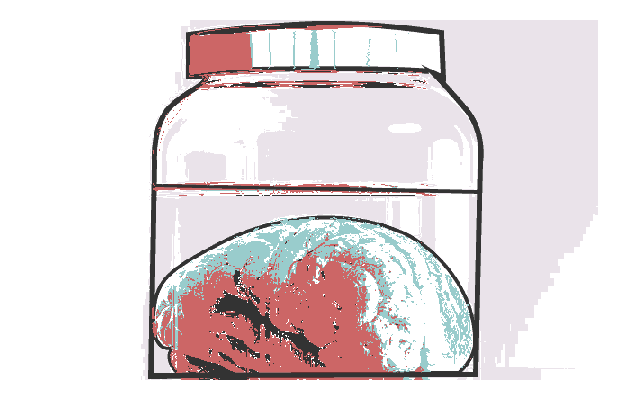 But software by itself is only a brain in a jar. In order to accomplish anything in the real world, the instructions in a program must be able to cause something to happen: switch on a light, move a robot arm, spin a disk drive.

The computer must be connected to some hardware, and the instructions must be able to communicate with the hardware.

That's where a special kind of software program called an operating system comes in.

A special caretaker program always running on the computer, an operating system controls any hardware connected to it.

Your Android phone runs an operating system named Android. It can display shapes on the screen, and it can detect the touch of your fingers.

A phone app is a software program. When you run an app on your phone, Android sits between the app and the phone's hardware, enabling the two to communicate.

When the app needs to make the phone hardware do something, Android performs the action on its behalf.

When an astronomy app wants to communicate with sensors, it does so via the operating system on your phone.