The greatest achievement of the U.S. Air Force since WWII doesn't get much recognition. In fact, many people aren't even aware who provides a service they depend on every day.

As travelers, we tend to take GPS, Global Positioning System, for granted. Every smartphone now comes with a GPS receiver built in, with up-to-date maps, ready to give you turn-by-turn directions.

And now our machines, too. From unmanned boats to self-driving cars, just about any outdoor mobile robot uses GPS to figure out where it is ("localization") and how to get to its destination ("navigation").

Any sufficiently advanced technology is indistinguishable from magic.

This is the story of how we got hold of this particular magic.

It Started With the Cold War

For nuclear deterrence against the Soviet Union, the Department of Defense maintained long-distance ballistic missile launchers on submarines and on land at various locations around the globe.

Before you launch any ballistic missile, you need to get an accurate fix, i.e., you need to know where the launcher and the target are located---the same localization problem.

The threat of nuclear annihilation concentrated minds and loosened purse strings. The government funded many research projects to build an infrastructure for accurate geolocation of military vehicles.

Scientists and engineers tried the idea of setting up a few radio stations broadcasting a signal periodically. Each signal identified the station and the time of transmission.

A military vehicle would carry a receiver to listen to these signals from several stations simultaneously. It would calculate how far away each station was based on the time difference between sending and receiving, and then use these distances to estimate its own location.

Such radio stations were built on land successfully. But nuclear deterrence required a service that would be available anywhere on the globe. It became obvious that the stations would need to be placed in orbit, thousands of miles up in the sky.

Calculating the position of a moving satellite is not easy, and estimating your distance from one based on a radio signal requires a very accurate clock and quick calculations.

The Navy and the Air Force tested out multiple methods for satellite-based location and navigation. A whole new set of technologies had to be developed, including special electronic receivers that could perform the calculations.

Finally in the 1980s and 90s, the Department of Defense launched a series of 24 satellites named NAVSTAR that combined the best of these ideas. 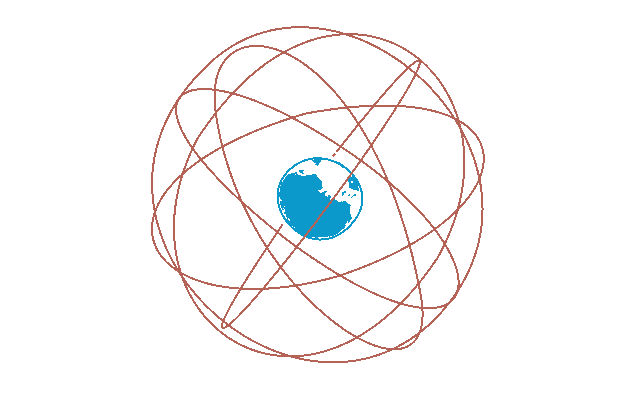 Their orbits were spread out in such a way that at least six or seven satellites remained directly visible at any time from any point on Earth to receive their radio signals.

The U.S. military now had a global positioning service, which could be used day and night, in war and peace. How exactly the service works is a fascinating story in its own right; maybe for another post.

A Gift To the World

Back in 1983, a Korean Air flight from Anchorage, Alaska to Seoul entered Soviet restricted air space. A Soviet fighter shot it down. All 269 people on board were killed, among them a U.S. Congressman.

The flight crew had made a navigation mistake which had resulted in the plane deviating from its path.

A U.S. military plane would not have made this kind of mistake, because it had the new GPS.

The Reagan administration decided to open up the use of the service free of charge to civil and commercial receivers worldwide.

This announcement triggered a demand for electronic receivers that could decode the radio transmissions and help people map their own locations.

Still, GPS was a valuable military asset that provided an edge in battle. Precise geolocation was to be denied to adversaries. The military intentionally degraded the signal available to civilians so that it was less accurate than the one its own receivers used.

But in 2000, the Clinton administration publicly abandoned this "selective availability" policy so that commercial and other civilian users could get better signals.

Many industries world-wide, including transportation and logistics, soon came to depend on these signals for their business.

In 1998, Congress directed the Secretary of Defense to "provide civil GPS service on a continuous, worldwide basis, free of direct user fees."

The U.S. Air Force develops, operates, and maintains the satellites and ground facilities that control them.

Over the years, the constellation has been enhanced with fresh satellites and newer communication standards to make them more reliable and more accurate.

The U.S. military controls the service and can deny it in any region of the world. This is why Russia, China, the European Union, Japan, and India have all launched their own satellite-based navigation projects, which are at various stages of completion.

GPS is still the granddaddy of them all and promises to be around for very long time.

So this Thanksgiving, don't forget to thank the U.S. Air Force for its service.