Coffee Control
Does your espresso machine need a PID controller?
2021-07-25 Previous Home Next

I enjoy a cappuccino, which means that ads for home espresso machines will often follow me around on the web. This is how I learned about a feature named "PID," a marketing term for a modern, high-tech method to control the temperature.

An "entry-level" espresso machine with this feature can cost over a thousand dollars.

What is this PID, and do you need it? 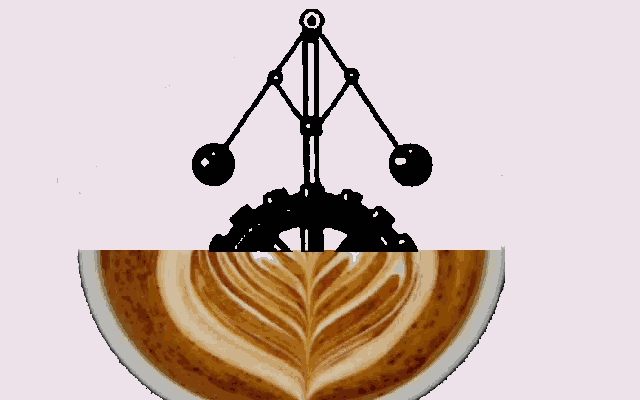 Years ago, I got a basic cappuccino maker for under a hundred dollars. It heats its boiler in two steps, first for extracting coffee under pressure, and then for steaming the milk.

Every morning, I grind the same generic dark beans to the same size, and set the machine's thermostat to the two settings one by one as I perform the two steps.

The machine is designed to work well within certain narrow parameters. If you deviate from these beans, grind, and timings, then it often fails to produce a good cup. (See Brian Bennett's CNET review from 2015).

If you want to experiment with different kinds of beans, syrups, and so on, or if you want to pull a more concentrated ristretto, then you need a more capable machine.

For flavored light roasts, you need finer grounds and a more powerful pump that can extract the flavor using higher pressure. The water will need to trickle through the finer grounds over a longer time, which means your coffee maker needs to maintain the temperature for more time.

However hot you decide you want the water to be, and for however long, the machine should be able to produce it.

This is where "PID control" comes in.

Even before the industrial revolution, engineers used mechanical devices to control the speed of windmills and water wheels. In 1788, James Watt, the inventor of the steam engine, needed to regulate its speed. He built a device called a "governor" based on earlier designs. The picture above shows his governor.

With the advent of microcontrollers in the 1970s (see The Little Engine That Could), people no longer needed to design clever devices. Instead, they could program a tiny computer to maintain any "process variable" like temperature, pressure, heading, etc.

The computer reads a sensor to measure the process variable, and then tries to maintain it at the desired level. For maintaining a temperature, it would turn on or off a heating element.

This idea is called "feedback control," and it's used in all kinds of industrial machinery, pipelines, ships, cars, and robots.

The most common feedback control programs are based on a mathematical procedure called proportional-integral-derivative control or PID control.

This is what the marketing literature is referring to. And if you're trying different ways of making espressos, it's probably a useful feature to have in your machine.

But you still need to know how to make the coffee.