The Little Engine That Could
How microcontrollers are ideally adapted to their niche.
2020-09-13 Previous Home Next

Your microwave oven, your refrigerator, your computer keyboard and mouse, your television remote, and your garage door opener are all controlled by tiny computers called microcontrollers.

Embedded inside cars and factory equipment, these computers are everywhere. Modern life would be impossible without them.

Since they were invented in the 1970s, computing has evolved at a relentless pace. And yet, in an industry always chasing the latest trend, many of these microcontrollers have remained unchanged. Why is that?

A microcontroller is a group of circuits that can function as a complete computer, storing a program of instructions and following the instructions.

Many companies in the United States, Japan, and Europe continue to sell dozens of varieties for device designers to choose from. 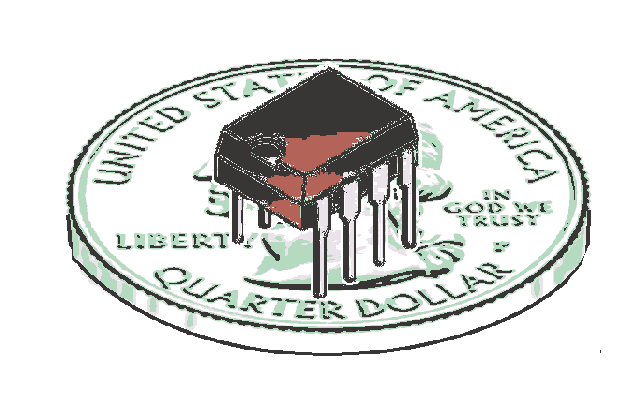 A typical and popular example is an AVR ATtiny. Originally developed in the 1990s, this product line is still being regularly produced and enhanced by a company in San Jose.

The picture above shows a standard plastic package containing one of these computers against a coin for size.

The eight "legs" are metal pins, through which the computer inside the package can send or receive electrical signals from the rest of the device in which it is embedded.

Traditional microcontrollers like the ATtiny are very low-capacity computers— they can only store short programs and remember very little information. They are referred to as "8-bit" computers in the jargon.

Miniaturization over the decades has squeezed far more powerful computers into packages of this size. These new computers have much more memory and can process instructions at a much higher speed.

For example, the computer in your phone is almost as small, but has the computing capability of hundreds of thousands of ATtinys.

Why haven't they been replaced by their descendants?

Well, for one, the 8-bit models are cheaper. The coin in the picture above could nearly pay for the computer.

But there's a much more important reason.

A Question Of Power

Why do some ancient species like dragonflies continue to thrive today? Because they have found a unique niche in the ecosystem.

Similarly, 8-bit microcontrollers have a niche, too: low-power applications.

A device that has to depend on battery power, for example a smoke detector, must make it last.

And this is where the 8-bit microcontroller shines.

Unlike the newer, faster computers, the 8-bit doesn't use much electricity to begin with. Plus, it has special features to reduce power consumption.

An ATtiny has the ability to just sit there, waiting for an external signal, without processing any instructions. In such a "stand-by" mode, it uses almost no electrical power.

"They also serve who only stand and wait."

For example, a weather monitor placed at a remote location might need to take a temperature reading only a few times a day. A computer like the ATtiny can wake up on a timer, record the temperature, and then go back to sleep. A device designed with an ATtiny could run for months, even years, on a single AA-size battery.

That explains why the 8-bit computers are still around.

As an engineer, I find it satisfying to design a device that uses only as much energy as it needs and no more. Happily, the economics also encourages frugality. High-tech does not have to mean wasteful.