Tide Us Over
We almost couldn't dislodge the Ever Given from the Suez Canal, until we got some help from the moon.
2021-03-28 Previous Home Next

The container ship that got stuck in the Suez Canal last week seems to be floating again as of Monday afternoon. 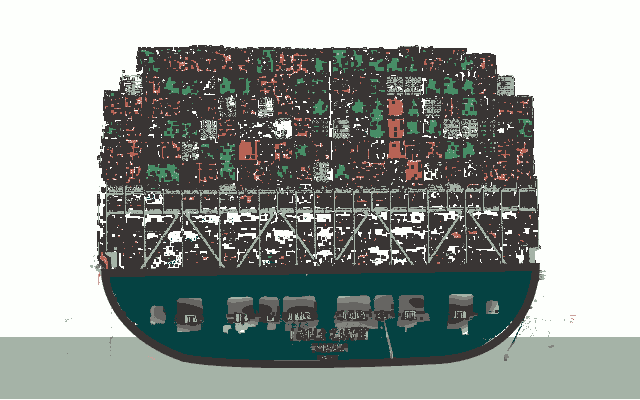 Shipping will resume through the Suez Canal soon, after this interruption of only about six days. But it would have taken a lot longer if it hadn't been for the moon.

Over the past decade, global demand has been pushing container ships to higher and higher volumes.

The Ever Given represents a giant class of container ship, designed to hold over 20,000 standard-size shipping containers.

The ship is 400 meters long. If you picked it up and planted it on the ground upright, it would become as tall as the Empire State Building. The picture above shows the view from behind the ship.

The shipping containers are stacked on these vessels. Imagine a pile of twenty thousand full-size trucks, a dozen high. In the past few months, such large container ships have run into rough weather in the Pacific and have lost their cargo overboard.

These things need a large body of water to float in. The Ever Given barely fits inside the Suez Canal. At the place where it got stuck, the canal was only 200 meters wide. When the ship veered off course in high winds, it got wedged diagonally between the opposite banks.

It was only a matter of time, and it's likely to happen again.

How they got it unstuck

For the past six days, dredgers and excavators have been struggling round the clock to remove sand while pulling the ship using fourteen tug boats.

Also, their timing was right.

The tides are regular, but they can rise higher and fall lower depending on the locations of the sun and the moon. Today the sun and the moon are in alignment, causing an exceptionally high tide called a Spring Tide. The water in the Suez canal is eighteen inches higher than normal.

Every time the tide gets higher, it lifts all boats. It is so powerful that it treats even the Ever Given like a cork in a bucket. The ship became more buoyant and easier to dislodge.

The moon did us a favor this time.