I had multiple people asking me to explain what an NFT is.

These NFTs are in the news because they've been selling for a lot of money. Should you be investing in them? 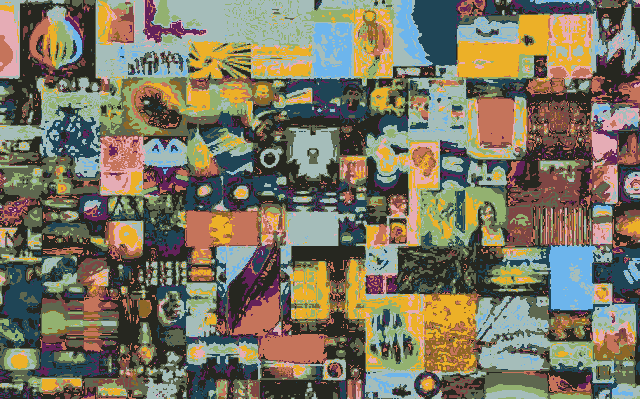 This is a close-up of a collage by an artist named Beeple. The artist created an NFT that stands for this digital artwork, and it was sold at an online auction for over 69 million dollars.

Other pieces of digital artwork, including music and even an old GIF image, have sold for hundreds of thousands of dollars as NFTs. Some investors are collecting them, perhaps with hopes of selling them later for more money.

So, what are these things, exactly?

If you try looking up "NFT," you'll find out that it is a "Non-Fungible Token," an electronic identifier kept in a distributed network, typically Ethereum.

Does that clear it up?

Didn't think so. The above description is besides the point.

One time my daughter wanted to know what was in an envelope. I could have said, "It's a vehicle title, a piece of paper, eight inches by ten inches, printed with the logo of the Commonwealth of Massachusetts, in fifteen colors." But that would have been unhelpful.

The above description leaves out the most important part, which is: What is the point of an NFT? What gives it its value?

A vehicle title's most important attribute is not its physical characteristics. The important thing is that the State of Massachusetts certifies that the title stands for a real asset that I own. That is its value.

When I paid off my car loan, the bank sent me the title with my name on it as the owner. If I sell the car to someone else, I will transfer the title to the buyer, and the government will recognize the buyer as the new owner, putting the buyer's name on the title.

The government's registry of deeds records this history of transactions. It lets the owner prove they own the car.

Some people like to collect trading cards, for example, baseball cards or gaming cards. These cards are bought and sold and can get valuable for various reasons. Similarly, people collect signed copies of books by authors, or signed copies of album covers by musicians.

These collectibles themselves serve as proof of ownership. There is no central registry that records who owns which card or which signed artifact.

Presumably the companies that print these cards could print more, and the artists could sign additional merchandise. But until they do, these artifacts might remain valuable. Their value is determined by investors who are willing to pay for them.

NFTs are similar to these kinds of collectibles.

NFTs are unique numbers stored in a database called Ethereum, just as a car title is recorded in a government database. You need to have an Ethereum account to participate. Every time the unique number is sold, the Ethereum database records the transaction.

The database has enough information to prove that the buyer paid for the NFT. I suppose it also has information about who created it and some description of the object.

So, now you know.

Unless you're an investor who deals in these sorts of collectibles, you should definitely not go anywhere near them. That's my advice.