In An Ideal World
The way computer programs solve problems might not be good enough for the real world.
2020-11-22 Previous Home Next

The heroine of the TV series The Queen's Gambit, chess prodigy Beth Harmon, lies awake planning a game. She imagines a board painted on the ceiling, the pieces hanging upside down. 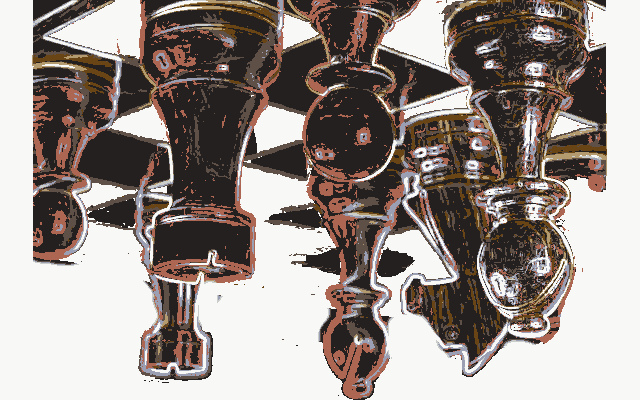 Very cinematic. But you don't need special abilities to visualize a chess board: every chess player learns to do it.

To plan your move, you have to predict its impact on the game, then anticipate your opponent's move and the effect that will have, then what you might do, and so on. This kind of "what-if" thinking is the essence of playing a strategy game like chess.

Logic constrains the game: only certain moves are permitted, and once a move happens, it changes the situation on the board in a definite, predictable way.

In this world, simple notations of symbols can completely describe moves and board.

Every chess move you make can be summarized with a couple of letters. For example, the popular opening called Queen's Gambit is written like this in standard notation:

It says: in Move 1, White moves the queen's pawn to column d, row 4, and Black does the same on his side. In Move 2, White attacks by moving the queen's bishop pawn to c4.

Anyone who knows the rules of chess can learn this notation. It lets you reproduce any game from a book, and to play chess over mail or email. If a game needs to be adjourned in a tournament, they record it using a similar notation so that it can be resumed later.

Computer programs, natural manipulators of symbols and perfect followers of rules, eat these notations for breakfast. A cottage industry of programs has grown to generate graphical illustrations for chess books, pamphlets, and Wikipedia articles from these notations.

Today, computer science students learn to write programs to play chess. The programs generate moves and countermoves, building a tree of possibilities. From these possible future worlds, the program selects the one that is most advantageous and plays its next move.

Programs already live in the logical world of the computer and are perfectly suited for manipulating logic using symbols. Chess-playing programs running on ordinary PCs can now beat grandmasters (see the article Being Intelligent About AI for a short history).

Unlike the world of chess, our physical world is messy. Dirt clogs the camera lens. Tires get stuck. Batteries die. Building an autonomous robot to deal with this unpredictable world is challenge: a far cry from just manipulating symbols. Logic is not enough.

A robot's sensors don't always detect important phenomena. When a wheel or an arm moves, it doesn't behave exactly the same way every time. Even a restricted lab environment can throw unexpected things at the robot. Unstructured settings like an open field or the surface of Mars are even worse.

Building an "embodied intelligence" that can react to the real world remains a challenging research problem so far.

The TV heroine Beth Harmon, who grows up in a broken home and in an orphanage, tells an interviewer that for her, chess is a refuge, a world where she is in full control.

The real world is hard, after all, even for a champion.